The Committee discussed in detail the current economic, political and investment climate, an overview of which is summarised below:

The committee reviewed the risk data for the Clarion funds and agreed that the VaR ratios and stress tests for Clarion Meridian and Explorer were in line with expectations and within internal thresholds.

The relative VaR ratio for the Clarion Prudence fund was slightly above its internal higher threshold of 130; however it remains below the regulatory limit of 200. The relative VaR ratio compares the fund’s current VaR to that of the benchmark, which has been set using the strategy’s long term strategic allocations. Compared to its strategic allocations, the Clarion Prudence strategy is currently overweight to equities and holds an active exposure to international equities, which is not present in the benchmark. Since the beginning of 2018 volatility in equity markets has increased, which has triggered a spike in the relative VaR ratio. The Committee looked at the fund’s performance relative to its benchmark and agreed that the strategy’s risk and return profiles were in line with expectations. The Committee will continue to monitor the relative VaR ratio and do not propose to increase the portfolio’s risk further at this stage.

The Committee agreed that all portfolios are managed in line with expectations and raised no concerns.

In equities, most of the UK equity funds outperformed the IA UK Equity Income sector, except for the Premier Income strategy. The Premier Income fund has a relatively flexible mandate and the manager allocates a significant portion of the fund’s assets to small and mid-cap equities. The fund’s recent weaker relative performance can be partly attributed to a weaker Sterling, which tends to benefit the earnings of more global, large-cap companies.

The Majedie UK Income fund was the best performing holding over 3 months, generating c.10% return in absolute terms and outperforming the IA UK Equity Income sector by c. 4%. While the Committee are pleased with the fund’s recent performance, Majedie announced that the current manager, Chris Reid, is leaving the company to pursue further education. Mark Wharrier will assume the manager responsibilities from November 2018 and in the interim the fund will be managed by Chris Field, the co-manager of the Majedie UK Equity fund.

The Committee are concerned that Mark Wharrier, who used to manage the BlackRock UK Income strategy, has a completely different fund management style compared to Chris Reid. Historically the BlackRock UK Income strategy’s performance was relatively similar to the performance of the IA UK Equity Income sector, while Chris Reid applied a more active strategy when managing the Majedie  fund. The Committee agree that the Majedie fund’s performance and risk profiles could change significantly once the new manager takes over. The Committee decide to make further enquiries and will ask Majedie whether the underlying investment process of this fund is likely to change and will debate their findings at the next IC meeting. The Committee agreed to keep the fund in the portfolio at this stage, however potential replacement options will be investigated.

There were no other changes proposed to the fund and the Committee are pleased with the performance of this strategy as well as its underlying holdings. 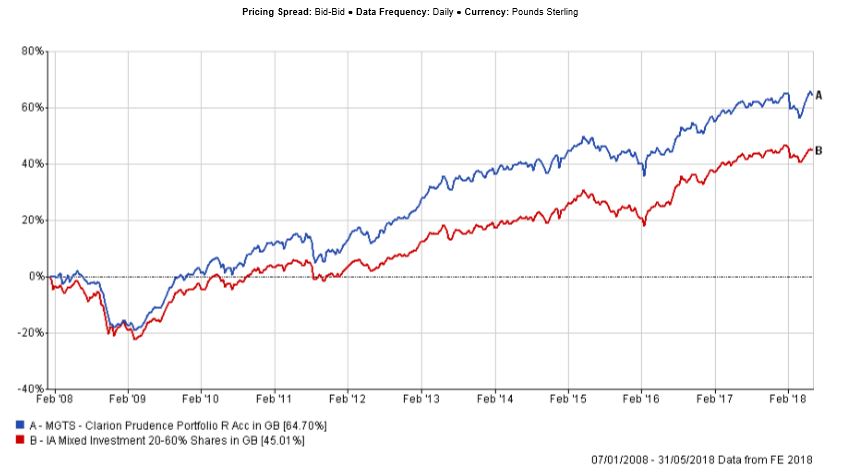 The fund performed strongly over 12 weeks and outperformed the sector by c.1.1%. Similar to the Prudence strategy, the overweight to equities and to the UK was the biggest contributor to returns.

Over the quarter all of the underlying funds have generated positive absolute returns except for the M&G Optimal Income strategy, which has lost c.0.5% over the period. The JPM UK Dynamic strategy was the best performer, and the Committee are happy with the strong performance of this fund, which was the latest addition to the portfolio.

The Committee are pleased to see some improvements in the performance of the Rathbone Income strategy, which lagged the sector earlier this year. The Committee hold a view that based on his long term track record the fund’s manager, Carl Stick has the skills and experience to successfully manage the portfolio over the longer term. The Committee also believe that the fund’s larger, more liquid holdings fell further in the recent market falls, as investors rushed to generate short term liquidity, while minimising trading costs.

The Committee raised concerns about the Invesco Perpetual European Income fund’s weak performance. This fund was initially purchased on the basis of its exposure to some more cyclical areas, such as energy, materials, financials and a significantly undervalued telecoms sector. The Committee’s expectations of these sectors outperforming in 2017 and 2018 have materialised, however despite the fund’s overweight position in these areas, its overall relative performance was weak, which indicates that the underlying stock selection was relatively poor. The above argument was also supported by the performance attribution data, while the manager’s commentary was not conclusive. The Committee made a decision to sell this holding and to reinvest 75% of the proceeds into the F&C European Growth and Income strategy and reinvest the remainder in the UK. The portfolio will now be 1% underweight to Europe compared to its long term strategic allocation and c.2% overweight to the UK, which is consistent with the Committee’s cautious view on the future performance of European equities.

Overall the Committee are happy with the performance of the Clarion Meridian fund and made no changes at this time. 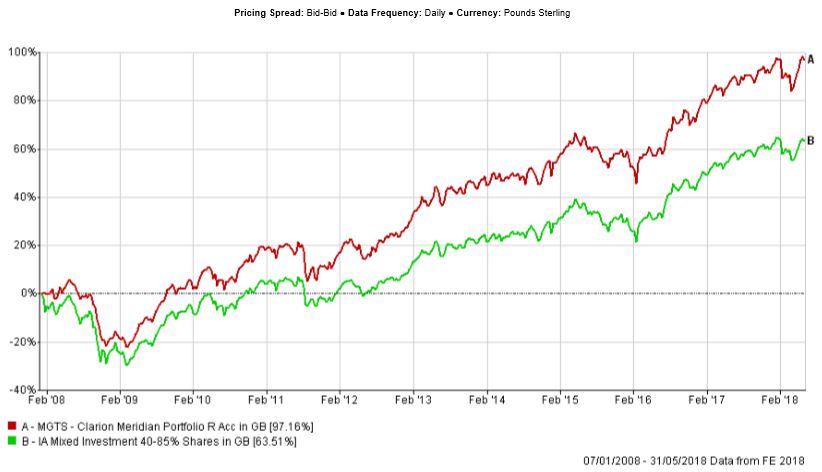 The fund has lagged the sector by c.0.4% over 3 months. This was primarily due to the overweight exposure to Asia and Emerging Markets as both regions lagged the UK and US over the period.

Fund selection was generally good across the portfolio, as only 3 active funds marginally underperformed their respective sectors by a maximum of 0.4%. The Jupiter European and Lindsell Train Japanese funds were the two best performers over the period, generating 6% – 7% returns and outperforming their benchmarks.

Most of the Jupiter European portfolio is allocated to companies with global earnings, which have not been significantly affected by the increasing political risk in Italy. On the contrary, their valuations have benefited from the recent weakening of the Euro, as overseas earnings increased in Euro terms.

The Lindsell Train Japanese strategy continued to perform strongly. The Explorer portfolio currently holds a hedged share class, which have done well against the sector, despite some of its relative returns being negatively affected by the recent strengthening of the Japanese Yen.

While slightly better over the shorter term, the performance of the Henderson Emerging Markets Opportunities strategy was below the IA Global Emerging Markets sector over 12 weeks. This fund has a near zero allocation to China and higher allocations to India and Latin America. This positioning was the main detractor from the fund’s returns over 12 moths, given that China was the strongest performing Emerging Markets country over the period, while India and Latin America lagged for various reasons. Historic drawdowns and standard deviations indicate that this is the lowest risk Emerging Strategy currently included in the portfolio and the Committee are comfortable with the longer term benefit it brings to the Explorer fund.

The Committee currently have no concerns regarding the Explorer fund and proposed no changes to the portfolio’s underlying holdings.