The Clarion Investment Committee (IC) met on 04 October 2017 to review the performance and composition of the Clarion Portfolio Funds. A summary of the Committee’s deliberations is detailed below.

The Committee discussed an overview of the global economic environment the key elements of which were as follows:

The ‘Goldilocks’ economy—not too hot and not too cold— which has been the backbone of the bull market in equities for 9 years looks set to continue for the foreseeable future as global financial conditions will remain highly accommodative despite the gradual reversal of quantitative easing in the United States.

Growth is not excessive and although there are short term inflationary pressures due to the weakness of sterling post the Brexit referendum last year, wage inflation is muted and inflation could be close to peaking with the result that there would be less pressure to raise interest rates.

Long term equity valuation measures are on the high side but look reasonable relative to bond valuations.

Financial leverage is not excessive as bank balance sheets have deleveraged and central banks are easing not tightening credit conditions.

Long dated bonds and cash remain unattractive due to the low relative and negative real rates of return.

Although the Bank of England may reverse the 0.25% base interest rate cut of last summer sometime this year it was noted that in a recent press conference The Governor of the Bank of England had suggested that any prospective increases in the bank rate would be at a gradual pace and to a limited extent.

It was also noted that the VIX index, a measure of market volatility, was at its lowest level for 25 years. This could be interpreted as complacency in equity markets but is more likely to be due to the fact that financial markets are awash with liquidity.

Political risks remain but it was agreed that despite Mrs May leadership looking precarious, there was unlikely to be a Tory party leadership challenge as this could be political suicide and lead to an early election and with the threat of a Corbyn Government. This is the last thing the Tory Government would want and are more likely to support Mrs May.

Brexit negotiations pose two way risks for equity and currency markets. We saw in 2016 how large an impact currency can have on multi asset returns. Whilst a soft Brexit would be good for the economy and property markets, it could lead to poor returns from overseas assets due to the currency effect. Low risk investors might therefore prefer the relative safety of high sterling exposure.

The Investment Committee continue to believe that a well-diversified portfolio of quality assets provides the best balance between mitigating downside risk and providing opportunities for growth and/or income. Quality equities remain attractive and the dividend yields in the UK, Europe and Asia suggests the risks of holding equities is well balanced. Emerging market equities should be able to weather the gradual tightening of monetary policy in advanced economies because the current account position of many emerging economies has narrowed substantially in recent years. Risk is in bond markets due to extremely low yields from this asset class and therefore fixed interest exposure is generally short dated with inflation protection.

The Committee reviewed risk management, eligibility and investment & borrowing reports all of which were in order and no action was considered necessary.

The Committee discussed the relative VaR (Value at risk) ratios on the StatPro report which were now within the threshold limits for all three funds.

It was noted that VaR for Meridian was now similar to the Benchmark having previously been below.

It was noted the VaR for Prudence was marginally higher than the benchmark but this is because of the valuation lag as the fund’s valuation is one day behind the benchmark.

The Committee concluded that overall the funds were taking an appropriate level of risk and are managed in line with their respective mandates.

The fund has slightly underperformed the IA sector average over 3 months which was identified as being due to short dated bond exposure during a period of tightening bond yields and a relatively high cash exposure. Performance since inception of the fund remains strong and is ahead of the sector average.

The Committee compared the fund’s performance against the sector over different time periods and concluded that the recent weaker short-term performance was due to valuation timing differences and that the actual figures were in fact stronger. Most of the fund’s underlying holdings have performed in line with expectations and have demonstrated strong 3-month absolute returns and have provided an adequate level of diversification.

A question was again raised about the current cash position of 18% and whether this could be justified given the low level of returns on cash. Cash can be useful in times of uncertainty in case markets fall and provides ammunition to buy at lower prices. The Committee have preferred to hold cash as the prospects for fixed interest markets have been, and remain, weak and therefore cash provides certainty although very little upside. It was noted that the current fixed interest holdings were generally short dated and yielding more than cash so this could provide some opportunity.

A proposal to increase all fixed interest funds and reduce cash was discussed but the Committee felt that this might contradict the negative bond theme which the Committee had held for some time. The Committee debated that whilst short dated funds did not expose investors to interest rate risk, there was still risk from credit spreads. It was demonstrated that there had been periods of underperformance from low duration funds when credit spreads widened. It was noted that credit spreads were currently historically low and therefore downside risk was present and relative high cash weightings in preference to bonds could be justified.

Commercial Property funds have previously been considered but the Committee remain cautious bearing in mind the problems experienced by some property funds last year after the Brexit referendum vote when prices were marked down by up to 20% and withdrawals were halted. It was suggested that an alternative could be to invest some of the cash in a commercial property freehold rents income trust available through both Standard Life and Time Assurance. Average returns have historically been in the range 4-5% per annum although as with property funds there can be a liquidity risk.

It was decided to conduct further research into the Time Assurance Commercial Freehold fund particularly with regard to the valuation method and liquidity constraints and review further at the next meeting.

All other underlying funds continue to perform in line with expectations and it was pleasing to note that the performance of the Franklin UK Equity Income Fund continued to be good and in particular was superior to the Trojan Income fund which had been sold recently and the funds released had been reinvested in the Franklin Fund. 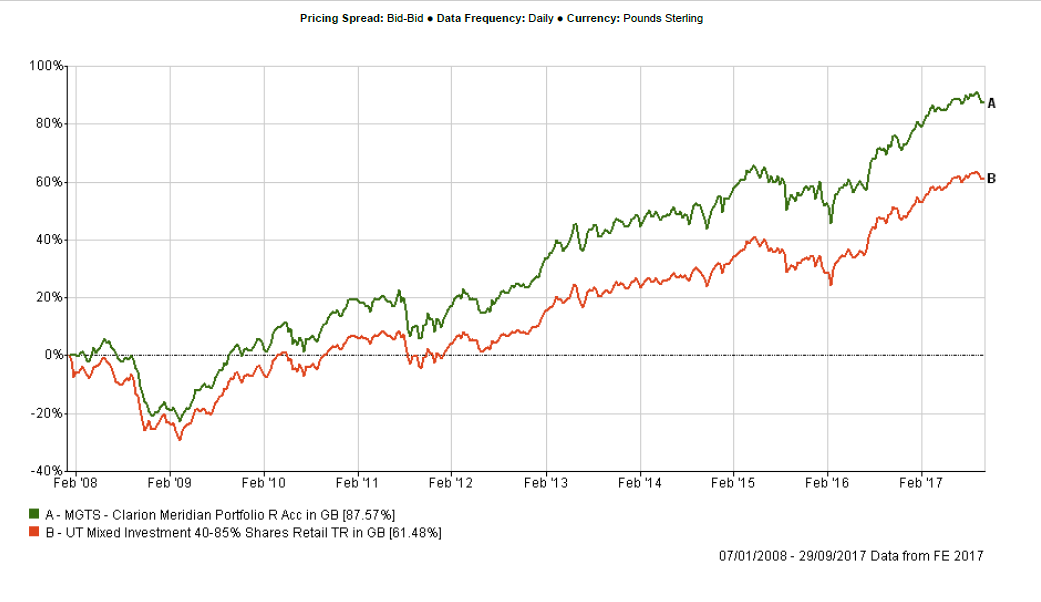 The Committee are generally pleased with the positioning of the Meridian fund and the performance of the underlying holdings with the exception of the Stewart Asia Pacific Leaders fund which has continued to underperform the sector over periods of 12 weeks and 1 year although very short-term performance showed signs of improvement. It was noted that the fund has a strong long term track record and is significantly different for other Asia/pacific funds in the sector.  The relative high exposure to India and low exposure to Chinese Tech stocks was cited as one reason for the relative underperformance.

All other underlying funds continue to perform in line with expectations and the Committee are pleased with the portfolios performance. 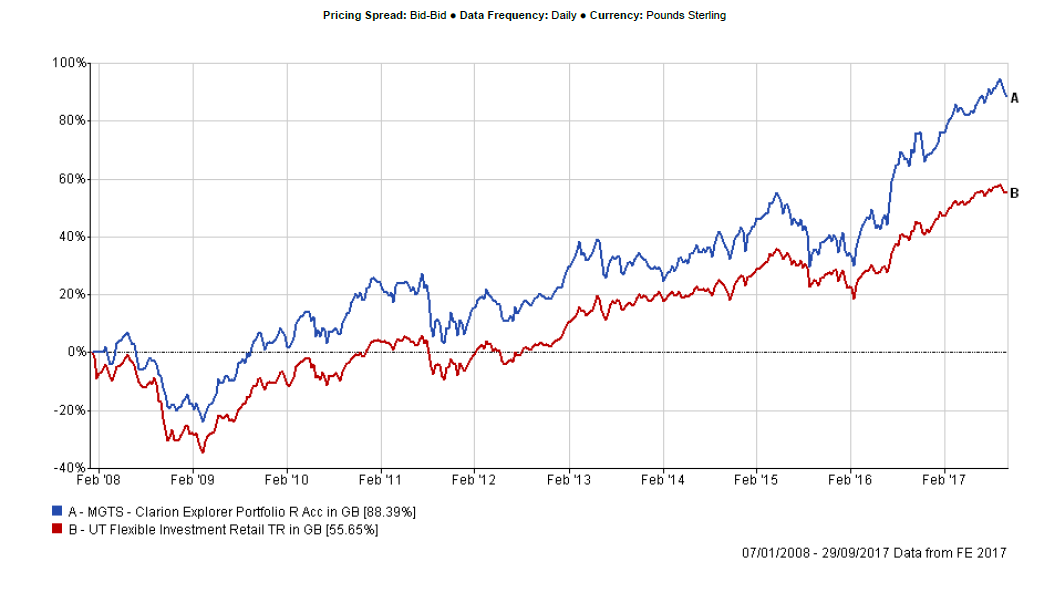 Investment performance remains strong with significant out performance over the sector average since inception and also over 1 year. Performance over a shorter period of 3 months was marginally weaker but overall the Committee continue to be pleased with the performance of this fund.

The Committee are comfortable with the diversification and country positioning of the portfolio except that once again the performance of the Stewart Asia Pacific Leaders disappoints and the same comments above under Meridian also apply.

It was again noted however that the Steward Fund does have different characteristics to the other Asia/Pacific funds in the Explorer strategy and therefore adds to the diversification characteristics. Bearing in mind the strong long-term performance and the diversification it was agreed the rationale for holding this fund in Explorer was stronger than for Meridian and it was therefore agreed to retain this fund in Explorer.

The Committee reviewed the performance of the Lindsell Train Japanese fund and the Hermes Global EM funds which were introduced at a previous meeting and noted that they were performing in line with expectations and had outperformed the funds they had replaced and had therefore made a good contribution to the portfolio returns. It was also pleasing to note that the decision to invest in the hedged share class of the Lindsell Train Japanese Fund had worked in Explorer’s favour following a further depreciation of the Japanese Yen in recent weeks. Consideration will be taken at a future meeting as to whether it might be appropriate to lock in the currency gains by splitting the Japanese allocation between a hedged and an unhedged share class.

The Committee reviewed the performance of the Jupiter European Fund which had caused concern at previous meetings and were pleased to note that the Fund had recovered all of its previous underperformance. It was agreed to keep the fund under review, however, as some Committee members expressed concern about the highly concentrated nature of the strategy and the large size of assets under management.

Overall the Committee are pleased with the portfolio’s performance, and no changes were proposed.

Management of the Clarion Model Portfolios

The Committee are pleased with the performance of the Clarion Model portfolios and no other changes were considered necessary.

The Fund Analyst provided a review of the FIRST STATE ASIA FOCUS FUND which you can see here. The key points for which are;

*Investment philosophy similar to other funds in the Steward Investors stable