The Committee discussed an overview of the global economic environment the key elements of which as follows:

It was also noted that the relative VaR ratio for Prudence is currently above the threshold due to an overweight to equities and an active allocation to global equity funds, which StatPro treats as higher risk compared to UK funds.

The Committee agreed that Prudence is currently within its risk tolerances.

Relative VaR ratios for Meridian and Explorer were in line with their respective benchmarks and the Committee made no further comments.

The Committee agreed that all portfolios are managed in line with expectations and raised no concerns at this stage.

Prudence is a very liquid strategy, and most underlying funds can be liquidated over one valuation point without incurring significant discounts. The fund has no exposure to property, high yield bonds and has a small residual exposure to small cap equities. These types of assets have lower liquidity compared to large cap equities and short duration bonds and could therefore appear to be more defensive during periods of market volatility due to their less tradable nature. On the other hand, more liquid assets can sometimes experience higher volatility as investors can sell them quickly to raise cash and improve their liquidity position during periods of market uncertainty.

The underlying fund selection in Prudence is generally strong both in bonds and in equities. All underlying bond funds outperformed their respective benchmark over 12 weeks, which is in line with the Committee’s long-term expectations that the performance of longer duration bond funds is likely to become weaker during a period of rising interest rates and higher inflation.

In equities, the active allocation to global funds did not benefit the portfolio’s performance over the quarter, given that most global equity funds underperformed their UK counterparts. The recent rise in Sterling is one of the main drivers for this performance differential.

The Premier Income strategy was the weakest holding among the underlying UK Equity Income funds. Most of the recent weaker relative performance of the Premier fund was due to one holding, Conviviality plc which went into administration in March. The dissolution of Conviviality was a ‘black swan’ event caused by a human error. According to Premier, despite losing an entire holding at this stage, overall Conviviality was a profitable holding, given that the manager sold some shares at the top of the market and received an 8% dividend over several years.

The Committee are pleased to see improvements in the relative performance of the Threadneedle UK Equity Income fund which has outperformed the sector over 12 weeks. This strategy lagged the sector in 2017 and its weaker returns have been discussed at a number of investment committee meetings. The Committee came to the conclusion that it has a strong underlying portfolio which was out of favour in 2017. Recent market falls confirmed the Committees opinion as the fund performed better than some of its peers with lower quality assets.

The analyst proposed selling the AXA Sterling Credit Short Duration fund which is relatively expensive compared to other short duration bond funds included in the IA £ Corporate Bond sector. The Fidelity Short Dated Corporate Bond fund has a better yield, more competitive cost structure and a similar performance profile. The Committee are generally happy with this change subject to a formal research note and appropriate due diligence by Margetts. It was agreed  to gradually build up a holding in Fidelity, utilising weekly rebalancing in a bid to avoid potential costs relating to dilution adjustments and price swings.

It was brought to the Committee’s attention that charges for the accumulation share class of the M&G Global Dividend fund are now deducted from the fund’s income payments. The Committee debated whether this is likely to be an issue for the Prudence portfolio and whether it requires a certain level of yield. The Committee agreed that the fund does not target yield and is operated on the basis of total return, therefore no actions were needed at this stage.

There were no other changes proposed to the fund and the Committee are pleased with the performance of this strategy as well as its underlying holdings. 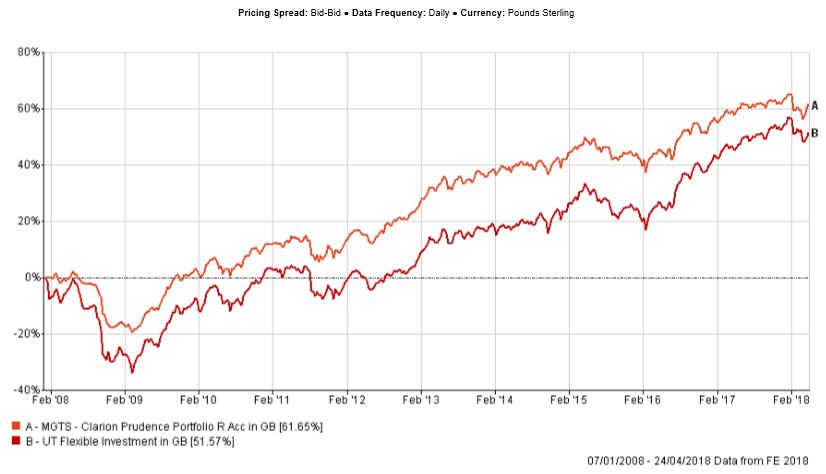 Over 12 weeks the fund’s returns were c.0.4% below the sector. As is the case with Prudence, the Meridian strategy only holds exposure to relatively high quality assets, and all underlying funds can be sold over one valuation point without incurring significant penalty charges. Performance since inception continues to be ahead of both the strategic sector and the benchmark and notably has outperformed the FTSE100 index whilst taking lower risk.

All underlying bond funds outperformed their respective sectors except for the Kames Investment Grade Bond strategy. The Kames fund is a more traditional average duration active bond fund, which has a strong historic performance and risk profiles. Clarion have now gained access to the cheapest available share class. However, the Kames strategy continues to be relatively expensive compared to some of its peers. The Committee discussed potential funds which can be used instead of Kames but remain uncertain that replacing Kames will benefit Meridian over the longer term. The Committee agreed to review the fund at the next IC meeting.

The performance of the Rathbone Income strategy improved over the shorter term and the fund is now ahead of the sector over 12 weeks. At the previous IC meeting the Committee questioned the recent period of weaker performance posted by the Rathbone fund, however given improvement in its returns, the Committee have no immediate concerns regarding this holding. A number of potential alternatives have been discussed from time to time and these will be kept on file in case the Committee decided to replace Rathbone in the future.

The Committee discussed whether the Fidelity Institutional South East Asia fund should be replaced with the BlackRock Asia strategy. Both funds have similar performance profiles, however the BlackRock fund has a more attractive cost structure. The Fidelity fund performed better over recent months and the Committee decided not to proceed with the switch at this stage and will review both funds at the next IC meeting.

Overall the Committee are happy with the performance of the Clarion Meridian fund and made no changes at this time. 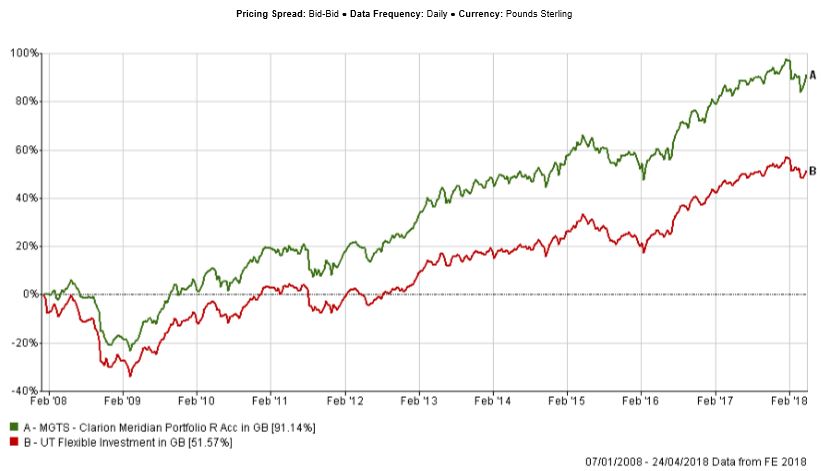 Most of the underlying funds included in this portfolio have a ‘Quality’ and/or ‘Value’ bias and often perform better during market falls, such as those experienced over the last two months.

The Committee discussed the Stewart Investors Asia Pacific Leaders fund. The performance of this strategy improved over the last 3 months and this is now the best performing underlying Asia holding included in the portfolio. The Stewart Investors fund is a defensive holding with a ‘Quality’ bias and a significant underweight to China relative to the sector. This fund underperformed the sector in 2017 as the latter was driven by the outperformance of the Chinese equity market. However, the fund responded well to the recent market dip and showed its defensive qualities.

Jupiter European continues to perform strongly despite its ‘Growth’ bias and high concentration. This fund has been a ‘star’ performer and despite a few periods of underperformance in 2016 and 2017, remained at the top of the sector.

The Committee currently have no concerns regarding the Explorer fund and proposed no changes to the portfolio’s underlying holdings. 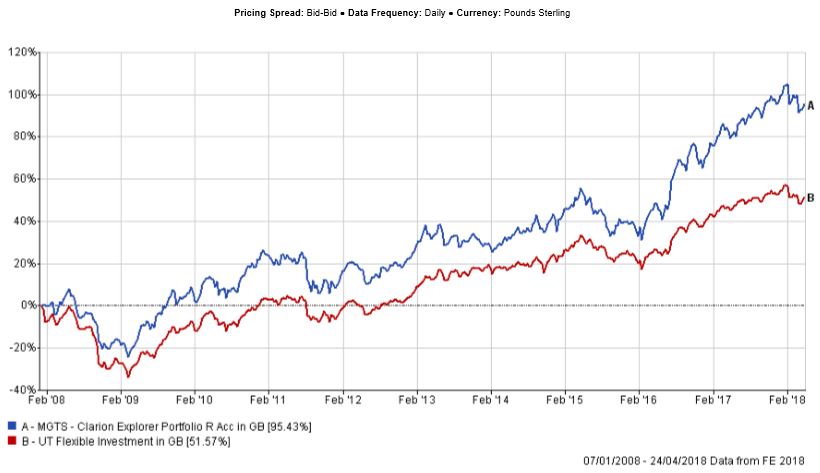 The Committee discussed the process of circulating minutes from the IC meeting. It has been agreed that prior to posting the latest minutes document to the website, copies will  be distributed a draft copy to all members of the Committee for everyone to check for potential omissions of any major points covered in the meeting.