The relative VAR ratio for Prudence was 130 which is above the higher threshold of 120, however it is still significantly below the regulatory threshold of 200.The Committee agreed that this is likely to be due to the differences between the risk and return characteristics of the indices included in the strategic benchmark and the Fund’s underlying holdings. Compared to the strategic benchmark, the fund is currently overweight to equities, which also contributes to the higher relative VaR ratio. It was agreed to look at the relative VaR figures for Prudence in more detail and will and review the findings at the next IC meeting.

The relative VaR ratios for Meridian and Explorer were in line with expectations and the Committee made no further comments.

The Committee agreed that all portfolios are managed in line with expectations and raised no concerns at this stage.

While the fund’s performance was marginally weaker compared to the sector, it has outperformed the strategic benchmark over 3 months. Over this period the fund has benefited from the overweight allocation to short duration bond funds. Compared to the sector the fund is currently overweight to the UK, which was the main detractor from relative returns, given that over 12 weeks UK stocks performed more weakly than other markets.

Performance since inception is ahead of both the sector and the benchmark.

The fund’s underlying UK holdings posted mixed 3 month results. Some more defensive funds have underperformed the sector, which can be partially due to their high liquidity which is likely to be exploited when investors with leveraged positions are looking to recapitalise their holdings. Despite some weaker performance in the UK, the Majedie UK Equity Income fund’s returns remained strong, were positive in absolute terms and were c.2.7% higher compared to the IA UK Equity Income sector. The Majedie fund has a significant exposure to Banks, Insurers and Oil companies, which have been less affected by the recent decline in equities.

The income bias generally did not work over the last 3 months and a number of income strategies experienced bigger falls compared to the wider market. The Committee believe that the performance of dividend paying companies is likely to improve and the prospect of future income streams is likely to outweigh the current market turbulence and short-term capital losses.

Compared to the sector the fund is currently underweight to assets with higher risks and lower liquidity. In particular, the fund does not currently hold High Yield and Strategic bond funds and avoids exposure to property and/or structured products. The Committee believe that while these assets may appear to be relatively low risk during periods of rising markets, due to their less liquid nature, they are more likely to experience significant price depreciations when faced with a period of consistent outflows. It is the opinion of the Committee that the potential profits of these strategies do not cover the underlying risks involved. Given its more liquid nature, during periods of high market volatility the Prudence portfolio can appear to have a higher standard deviation compared to the sector, however standard deviation is not a reliable measure of risk.

Overall the Committee are happy with the performance of this strategy, and believe that its return and risk profiles are in line with expectations and the investment process. There were no changes proposed to the fund at this time.

Compared to both the sector and the benchmark, the fund is currently overweight to equities and underweight to bonds. This positioning has detracted from the fund’s relative returns, given that bonds generally outperformed developed market equities over 3 months. However, the underlying fund selection has been strong across all asset classes and most underlying funds outperformed their respective benchmarks over the period.

In bonds the fund remains underweight to longer duration strategies in favour of short duration bond funds. The Committee’s view on the future upward sloping trajectory of Gilt yields is now beginning to materialise. Rising bond yields are expected to have a more significant effect on the valuations of longer dated bonds, while shorter duration bond funds are less exposed to this risk.

European and US equities outperformed the UK, which has absorbed some relatively bigger falls. In the UK, the SVM UK Growth fund was the only underlying UK holding with positive returns over 12 weeks. The SVM strategy has a tilt towards mid-cap growth stocks, which performed surprisingly well in current markets. The Committee believe that this could be due to the Funds lower exposure to movements in Sterling which has appreciated over the period, and the less liquid nature of its underlying investments, given that many investors are expected to trim their more liquid positions when facing the need to raise liquidity during market falls.

The Committee commented on the relatively weak performance of the Rathbone Income fund, which is expected to have defensive characteristics. In a meeting, Carl Stick, the manager of the Rathbone Income fund, explained that most of the fund’s underperformance in Q4 2017 / January 2018 was due to holdings in Provident Financial and Saga and confirmed that both stocks have now been sold. Despite a short term period of stronger performance in February 2018, the fund continued to underperform the IA UK Equity Income sector in March. Given Carl Stick’s long term track record of consistent returns, the Committee are not currently looking to sell this holding; however its performance will be monitored closely going forward.

The Committee discussed replacing the Majedie UK Equity fund following a period of disappointing performance this strategy has recently shown. The Committee considered three potential alternatives which include Lindsell Train UK Equity, Liontrust UK Special Situations and JPM UK Dynamic. The Committee looked at the performance profiles, concentration and top portfolio constituents of all three funds and decided to replace the Majedie fund with the JPM UK Dynamic strategy. The performance profile of the Lindsell Train fund looked most attractive, however members of the Committee agreed that this strategy looked too concentrated for its size of c.£7bn. Both the JPM and Liontrust funds have a c. 50% – 60% exposure to small- and mid-cap equities and have comparable performance profiles. The JPM fund has been chosen over Liontrust due to its size of c.£200m which is significantly smaller than the c.£3,500m managed by the Liontrust strategy.

It has been agreed that the sale of Majedie and the purchase of JPM will be executed at the discretion of Margetts, who will look to place these trades when the volatility in equity markets have normalised. It was agreed that placing significant trades during periods of high market volatility is likely to be more costly due to wider bid/ask spreads and the potential for large daily price swings.

The Committee discussed replacing the Fidelity Institutional South East Asia fund with the cheaper BlackRock Asia strategy. The Committee looked at the performance profiles of both funds and decided that the two look very similar. Due to the current market volatility this decision has been postponed and will be discussed again at the next meeting.

The Committee are generally happy with the performance of the fund and no other changes have been proposed at this time. 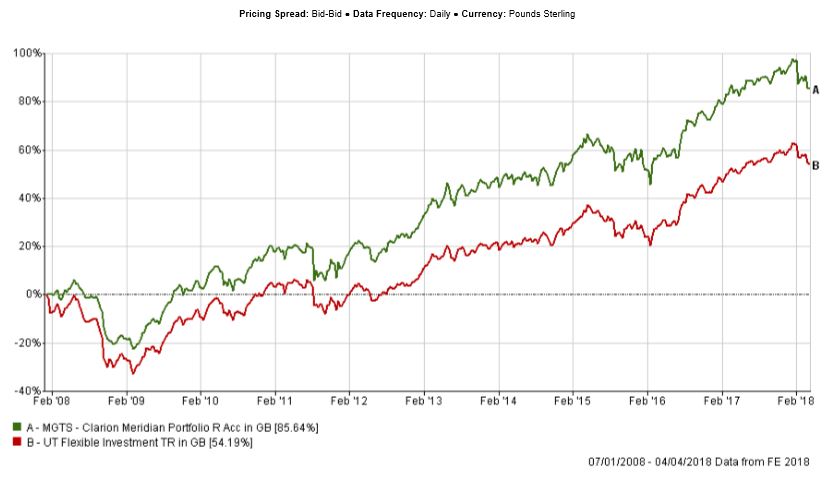 The fund’s performance has remained strong as the strategy has outperformed the sector and benchmark by c.1.7% and c.1% over 12 weeks respectively. Performance since inception is ahead of both the sector average and the strategic benchmark.

The active overweight exposure to Asia and Emerging Markets was the largest contributor to relative returns, given that all underlying Asian and EM funds had positive 3 month returns in absolute terms. The Fidelity Asia and Standard Life Global Emerging Markets Equity Income funds were the strongest performers compared to their underlying peers.

The Committee acknowledged the positive relative performance of the Jupiter European fund, which has recovered strongly from a period of underperformance in the first half of 2017. This fund has been a strong long term performer, however given its concentrated nature and significant bias to growth stocks, some members of the Committee had concerns regarding its future performance. The Committee have previously discussed this fund on a number of occasions and agreed to retain it in the portfolio.

The Lindsell Train Japanese hedged fund was another strong performer and contributor to relative returns. Similarly to Jupiter European, the Lindsell Train strategy is concentrated and biased to growth stocks. This strategy is currently held alongside the more value biased Schroder Tokyo unhedged fund, which performed more weakly over 12 weeks. The Committee believe that the two strategies blend well together and provide a good level of diversification.

The relatively poor 3 month performance of the Stewart Investors Asia Pacific Leaders was discussed. While the long term track record of this strategy looks impressive, the Committee found the more recent 12 month and 3 month performance to be disappointing. The Committee are aware that this fund is expected to have a more defensive performance profile compared to the sector, and often underperforms during strong market rises and outperforms during flat or falling markets. The Committee discussed replacing this fund with a similar strategy operated by another team working under the Stewart Investors umbrella (the First State Asia Focus fund). Due to the current market volatility no decision has been made at this stage and the Committee agreed to review this at the next IC meeting.

The Committee are currently happy with the fund’s performance, and no changes were agreed at this meeting.