The Clarion Investment Committee (IC) met on 13 September 2017 to review the performance and composition of the Clarion Portfolio Funds. A summary of the Committee’s deliberations is detailed below.

The Committee discussed an overview of the global economic environment the key elements of which were as follows;

The Investment Committee continue to believe that a well-diversified portfolio of quality assets provides the best balance between mitigating downside risk and providing opportunities for growth and/or income. Specific risk is in bond markets bearing in mind the desire of Central Banks to move gradually towards normalisation of monetary policy and therefore fixed interest exposure is generally short dated with inflation protection. The Committee believe that global inflationary risks exist in the medium and longer term.

The Committee reviewed risk management, eligibility and investment & borrowing reports all of which were in order and no action was considered necessary.

The Committee discussed the relative VaR (Value at risk) ratios on the StatPro report which had changed since the last meeting.

It was noted that Prudence was now similar to the Benchmark VAR having previously been below. Meridian and especially Explorer remained below the benchmark VAR.

It was agreed that Meridian could potentially take more risk in the future if the Committee identified opportunities; however, Explorer was considered to have a lower VAR due to the active managers successfully reducing risk within Emerging Markets and Asia, which has benefitted the fund.

The Committee concluded that the funds were taking an appropriate level of risk. 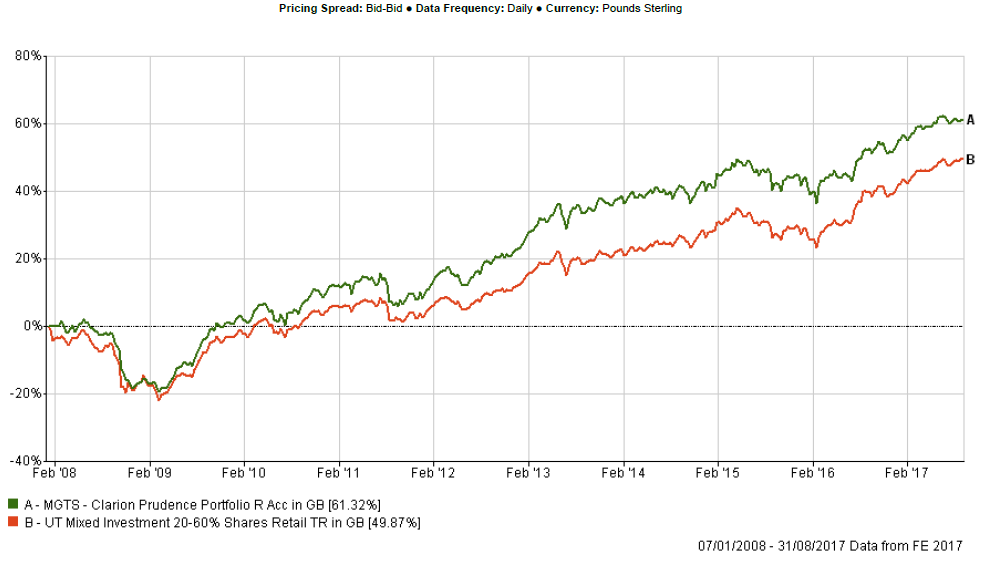 The fund has slightly underperformed the IA sector average over 3 months which was identified as being due to short dated bond exposure during a period of tightening bond yields. It was noted that Gilts had fallen significantly in the previous 24hrs but the reference data did not include this information and therefore actual performance may be better than indicated. Performance since inception of the fund remains strong and is ahead of the sector average.

A question was raised about the current cash position of 18% and whether this could be justified given the low level of returns generated from cash.

The committee was in agreement that the prospects for fixed interest markets were weak and therefore cash provided certainty although very little upside. It was noted that the current fixed interest holdings were generally short dated and yielding more than cash so this could provide some opportunity.

The M&G Inflation Linked Fund, already held within the Clarion fund, was reviewed as an example of a short duration fund which had outperformed cash over the past year. The committee considered if there was an argument to justify holding cash instead of this type of fund.

A proposal to increase all fixed interest funds by 1% and reduce cash by 6% was discussed but the committee felt that this might contradict the negative bond theme which the committee had held for some time. The committee debated that whilst short dated funds did not expose investors to interest rate risk, there was still risk from credit spreads. It was demonstrated that there had been periods of underperformance from low duration funds when credit spreads widened. It was noted that credit spreads were currently historically low and therefore downside risk was present and high cash weightings could be justified.

It was therefore agreed that the current cash position could be justified and that no action was required at this time but the committee would actively consider opportunities to reduce cash if the investment case was convincing.

It was proposed consideration should be given to a commercial property fund and the committee reviewed the performance of the Henderson, Standard Life and Kames funds. Some committee members felt uncomfortable with property due to the liquidity risk and also that London prices might be negatively affected by Brexit. It was agreed that the Kames fund had the strongest case due to the provincial nature of the portfolio and the higher yield available.

Another alternative to cash might be available through a high yield bond fund such as the GAM Star Credit Opportunities fund which has an equity correlation and could suffer a fairly significant drawdown in negative market conditions although this could also apply to property funds.

Some committee members expressed reservations about buying absolute return funds or strategic bond funds as the risk characteristics of these assets is hard to quantify and can change significantly win adverse market conditions. However the committee was willing to have an open mind but would need to see strong evidence to support any proposal in this area.

It was therefore agreed to take no action at this time but further research will be conducted into all possible options for further consideration at the next meeting.

All other underlying funds continue to perform in line with expectations. 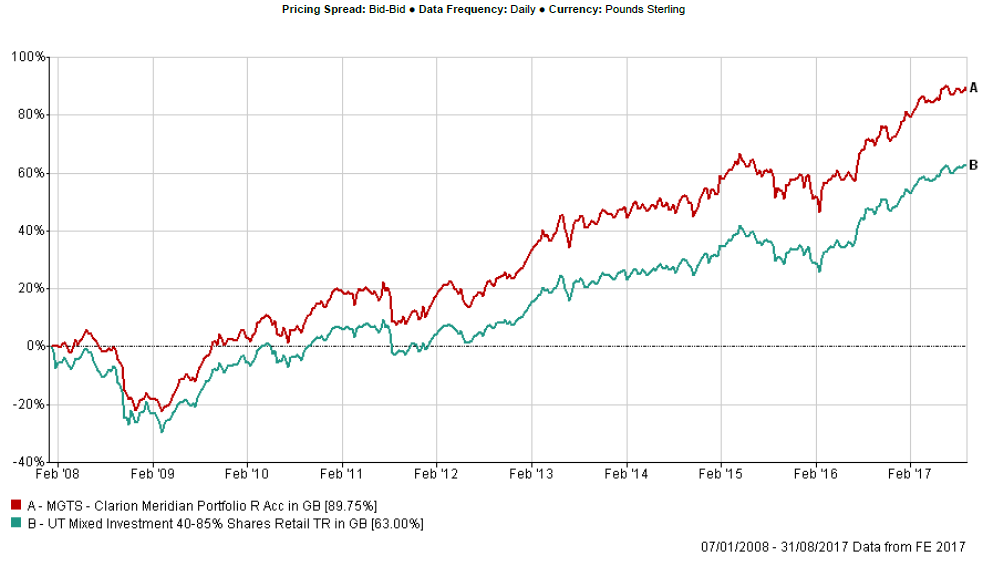 Performance was ahead of the sector average over 3 months, 1 year and also since inception of the fund.

The cash holdings were discussed and it was agreed that the comments made in relation to the Prudence fund were equally relevant to the Meridian fund and therefore the same conclusion was valid.

The committee looked at the Stewart Investors Asia Pacific Leaders fund which remains under review due to relative poor performance. The value nature of the strategy was discussed and the long term track record was reviewed which remains strong. The high exposure to India and low exposure to Chinese momentum stocks was the cause of the underperformance although the recent short-term market dip would provide useful context to review this fund at the next meeting as it should outperform on market falls.

The committee noted that the Stewart fund was similar to an Asian Income mandate and therefore income funds could be considered as a replacement. Data was produced which demonstrated that the Steward fund has underperformed in a similar manner to other strategies with overweight positions to India and Australia so it was accepted that geographical allocation was the reason for the underperformance rather than stock selection.

The committee agreed to defer the decision regarding the possible replacement of the Stewart Investors Fund to the next meeting given the stronger data comparisons which would be available at that time.

All other underlying funds continue to perform in line with expectations. 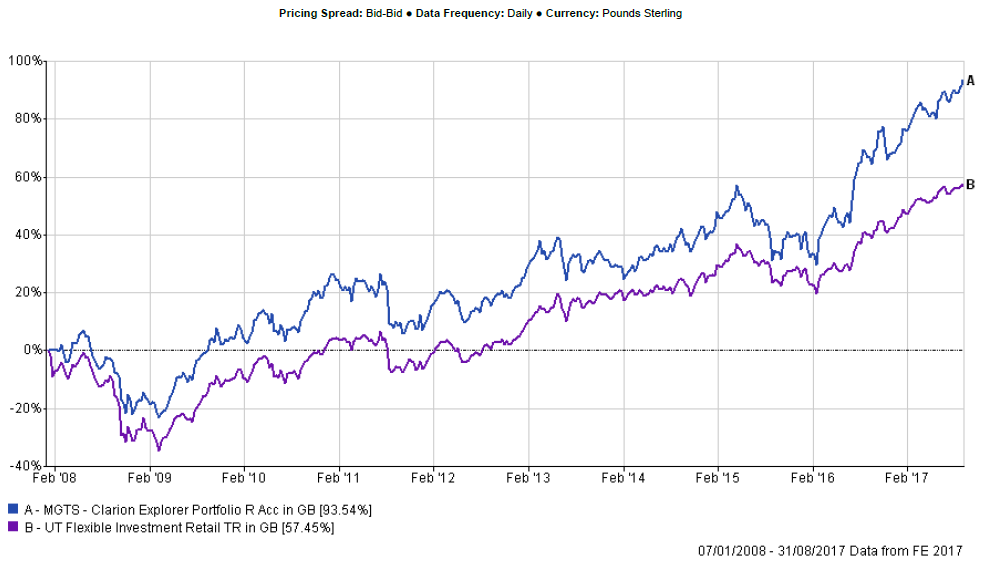 Investment performance remains strong with significant out performance over the sector average since inception and also over shorter-term periods of 3 months and 1 year. The committee are pleased with the performance of the fund which is currently ranked at 19 within the sector.

A question was raised regarding the FundSmith holding which had been sold following a meeting some months ago and whether the switch had been positive or negative to performance. It was noted that the FundSmith holding had demonstrated a high correlation to Gilts and therefore the sale was consistent with the committee’s views on fixed interest investment. As yields have fallen following the switch into the M&G Global Dividend fund, FundSmith had initially continued to outperform but in recent weeks the trend has reversed in favour of the trade.

The committee reviewed the short-term performance of the Lindsell Train Japanese fund and the Hermes Global EM funds which were introduced at the last meeting and noted that they were performing in line with expectations.

It was noted that the overall selection had performed strongly except for the Stewart Investors Asia Pacific Leaders fund. The committee felt that comments made in relation to the Meridian fund applied and the holding would be reviewed at the next meeting.

The committee felt that the rationale for holding this fund in Explorer was stronger than Meridian as it provides a higher diversification benefit given it behaves differently to the other funds held in the same geographical area.

Overall the Committee are pleased with the portfolio’s performance, and no changes were proposed.

Management of the Clarion Model Portfolios

The Committee reviewed the Lindsell Train Japanese fund. The key points are noted below.