Minutes of the Clarion Investment Committee held at 1pm on 8th April 2021 by Video Link.

Minutes from the previous meeting held on 11th March  2021 were agreed by the Committee as a true and accurate record.

The UK continues to forge ahead in its successful vaccine rollout with over 35 million Brits (half of all UK adults) having received their first dose of the vaccine, and over 5 million having received their second dose. The initial priority group, including all over 45s and those with underlying health conditions have now all been offered their first dose while the date for the rest of the adult population in the UK is July 31st. Fears of a resurgence as children returned to school proved to be unfounded, as new infections, hospitalisation and death figures all fell, and the crucial “R” number remained below 1.

Israel is leading the world in its vaccination rollout three months after it first began, with over half the population already fully vaccinated. Israeli citizens who have either recovered from Covid-19 or received both doses of the vaccine have been allocated a “green pass” allowing them to access venues not already open to other members of the public. The US has also ramped up its vaccination program, which has seen more than 30% of the population receive their first dose and approximately 15% of the population receive both doses.

By comparison, the outlook for the EU is far bleaker as their vaccination program has lagged the rest of the western world. Having been late to order and approve vaccines, and begin their vaccination program, the EU rollout was further marred by unsubstantiated scares surrounding the safety of the Oxford/Astra Zeneca vaccine (the provision of which was temporarily paused), production and supply issues, and a lack of uptake by the public. With countries such as Germany and France showing signs of a possible third wave, economic recovery in these areas is likely to be months behind the UK. For Brexiteers, this could be seen as a clear vindication of Brexit.

In the early days of April reports began to emerge of a huge block sell trades in select US and Chinese stocks, worth c.$100 billion. These trades were later revealed to be the result of an overleveraged low profile hedge fund, Archegos Capital, defaulting on margin calls. Some stocks plummeted more than 50% and others saw double digit falls. Prime brokers affected in the liquidation were Goldman Sachs, Morgan Stanley, Credit Suisse, Nomura, and Deutsche Bank. Goldman Sachs, Morgan Stanley and Deutsche Bank moved rapidly in liquidating assets and suffered only relatively small losses as a result, but Credit Suisse and Nomura appear to have been left as the bag holders, nursing prospective losses in the billions. Archegos managed to rack up almost eight times leverage using total return swaps, and the scale of the leveraged position was spread out across multiple banks, meaning the total exposure was not readily apparent.

Bill Hwang’s reported $30 billion fortune was wiped out in days.

The failure of Archegos Capital demonstrates the value of risk diversification amongst a variety of assets. Despite large falls in the individual stocks, most of the market remained unaffected and well diversified investors will not have seen a material impact to their portfolios as a result. The Clarion Portfolio Funds and model portfolios, by virtue of careful attention to asset allocation, and the additional diversification offered by a fund of funds structure (where each of the c.15-20 portfolio holdings will themselves be invested in dozens, and possibly hundreds of companies each) demonstrates their value in capital preservation in such times.

With stimulus injected during Covid more than $20 trillion, inflation risk remains a firm focus. Even a slight increase in inflation could have a significant impact on the expected return of long-dated bonds and, as such, the Committee continue to favour shorter-dated bonds within the portfolio funds and model portfolios.

UK equity yields continue to rise as dividends are reinstated and offer attractive valuations relative to bonds.  Sentiment is beginning to look more favourable towards the UK, compounded by the UK’s successful vaccine strategy and the value focus of its indices, which have benefitted from the growth to value rotation seen since Q4 last year, and accordingly our portfolio funds and model portfolios retain an overweight positioning.

Asia Pacific equities have performed well through the pandemic and remain at reasonable prices in terms of historical valuations. As such we retain an overweight position in this sector at present.

In contrast, large tech stocks dominate the US stock market, with FAANG stocks comprising over 20% of the S&P 500, and it is our view that valuations have become extended, which justifies our underweight allocation to the US.

Management of the Clarion Funds: Prudence, Navigator, Meridian and Explorer.

To summarise, the committee agreed the following changes to the Prudence fund:

To summarise, the committee agreed the following changes to the Navigator fund:

To summarise, the committee agreed the following changes to the Meridian fund: 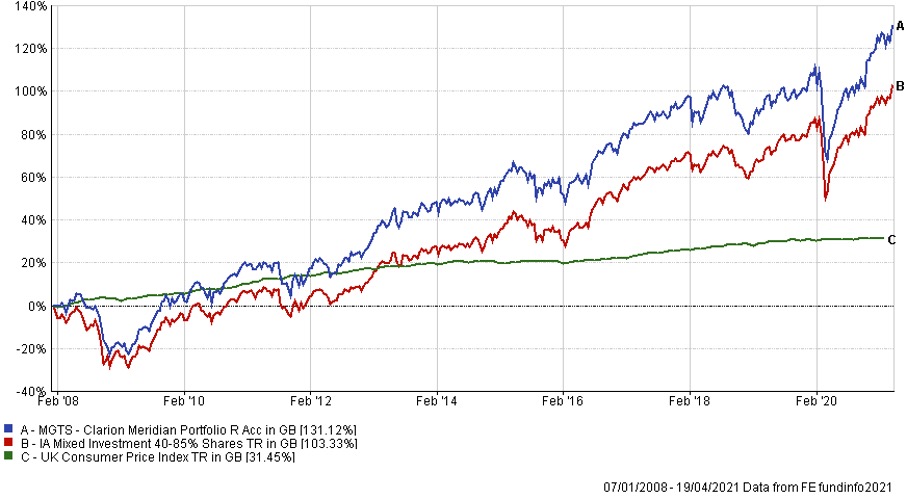 To summarise, the committee agreed the following changes to the Explorer fund: 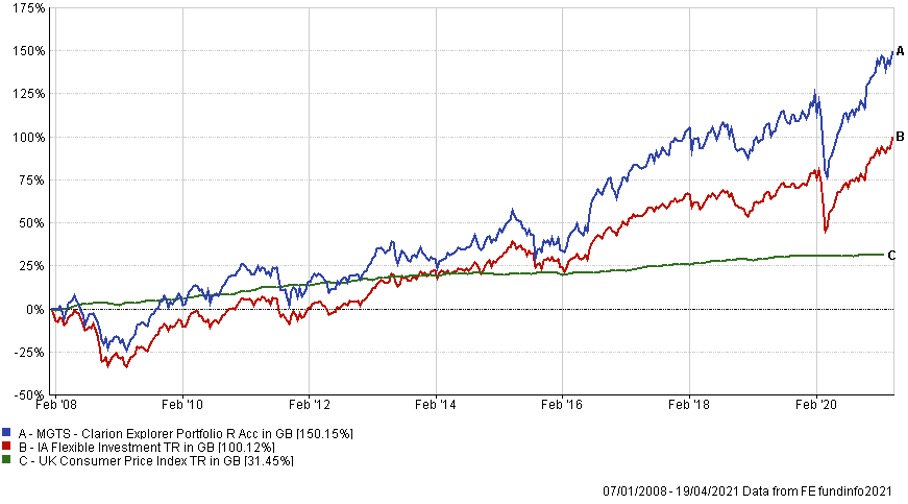 The next Investment Committee Meeting is on 6th May 2021 although in the interim period the Committee intend to conduct slightly shorter conference calls as considered appropriate.