Minutes of the Clarion Investment Committee held at 1pm on 14th January 2021 by Video Link.

Minutes from the previous meeting held on 10th December 2020 were agreed by the Committee as a true and accurate record.

2021 is expected to be a year of recovery, catch-up and accommodation.

The IC expects 2021 to be a better year for the global economy than most envisage. GDP growth in many major economies will surprise on the upside, with those that suffered the sharpest downturns in 2020 generally rebounding fastest.

While recently renewed restrictions in many developed market economies will weigh on economic activity in the first half of this year, behaviour should quickly return to normal once the vaccine rollout allows for these measures to be relaxed or removed.

The outlook for much of emerging Asia is comparatively upbeat, while the slow rollout of vaccines will limit recoveries in Latin America and Sub-Saharan Africa. Tourism-dependent economies will feel the benefits of receding virus fears and oil exporters will gain from increased travel.

Risk assets will gain more ground and the US dollar will weaken against a backdrop of a recovering global economy and continued accommodative monetary policy.

2021 will be a year of two halves for developed market economies.

The next few months will be hard as the United States and Europe suffer from renewed coronavirus related restrictions. Large increases in coronavirus infections in October and November forced many governments to tighten restrictions towards the end of last year. While these measures showed some signs of beating back the resurgence of new cases, especially in continental Europe, progress has stalled or even gone into reverse more recently, despite restrictions remaining in place.

But the good news is that last years’ experience shows that the economy can rebound quickly when lockdowns are lifted. Effective vaccines have shone a light at the end of the tunnel and the vaccine rollout will allow restrictions to be removed in major advanced economies in the second quarter of 2021. After that, behaviour should quickly return to normal and consumers will spend some of their pent-up savings, causing a sharper recovery than generally anticipated.

Talk of impending fiscal austerity in advanced economies apart from the United States seems overdone and higher public debt loads are sustainable. Inflation might rise somewhat this year as activity recovers, particularly in the United States. But central banks are likely to look through this given the ongoing shift towards tolerating above target inflation for limited periods. Overall, inflation will remain very low by historic standards and the Investment Committee do not expect any sustained upward pressure on prices for the foreseeable future. The European Central Bank is expected to extend its net asset purchases until the end of 2022. Meanwhile, the latest language from the Fed suggests that its net asset purchases will continue for several more years. If downside risks were to materialise, it might lengthen the average maturity or increase the pace of its purchases.

China’s rebound from the Covid-19 shock has been swifter and stronger than anticipated and this robust performance looks set to continue. While the sharp and unexpected contraction in the first quarter of 2020 pulled China’s annual growth down to the lowest in decades, the strength of its subsequent rebound has been just as noteworthy. Indeed, China will be one of very few economies to grow at all in 2020. While state-led investment and exports have driven the recovery so far, a stronger labour market should continue to push up consumer spending too. The Investment Committee expects that the strength of this recovery will pave the way for some policy tightening by the People’s Bank of China next year, making it the only major central bank to raise rates. Yet this policy reversal is unlikely to derail the recovery and it is expected that China’s economy will remain a global outperformer this year.

The sharper-than-anticipated global economic recovery is unlikely to prompt a rise in bond yields. Asset purchase programmes and other tools have afforded central banks greater control over long-term interest rates and it is likely that they will strive to keep them down.

This will support further gains in equities this year and the positive rotation in favour of the sectors that suffered most during the crisis should continue. After a pandemic-driven rollercoaster of a year in financial markets, risk assets have rallied since the start of November, thanks to the results and fading of uncertainty around the US election and, more importantly, news about effective vaccines for Covid-19. At the same time, the yields of safe government bonds have risen only slightly, while the US dollar has weakened, especially against riskier currencies. This pattern is expected to continue this year.

Many of the potential hurdles that lay in the path of market recovery from the depths of the Covid-19 pandemic have been resolved with a Brexit deal having been finally agreed in late December, a new US President finally being inaugurated after much drama and not one but three vaccines receiving regulatory approval. The stage is set for a bullish run in equities, particularly for the “losers” of the pandemic most likely to benefit from the vaccine distribution. The UK indices are more biased towards these companies than other contemporaries, with a host of stocks covering the battered travel, leisure and services industries. With a Brexit deal now secured, overseas investors have confidence in the outcome of their decisions in a way not possible since the middle of 2016. These factors, along with the UK’s quick start in vaccine approval and distribution so far, should see the UK outperform on a relative basis compared to other equity markets.

We also maintain our overweight position to Asian equities based on their successful response to the initial wave of the virus, where economic indicators have returned to normal except for tourism. These countries have had a head start in their return to growth and, with most western countries still struggling with varying degrees of lockdowns until vaccines are sufficiently rolled out, at least another quarter of relative outperformance is likely. Equity valuations are not cheap based on long-term historical metrics but, in the circumstances, they are attractive.

Central banks continue to lead bond markets by the nose, squashing the long end of the yield curve to ensure cheap long-term borrowing is available to pay for the costs of the pandemic. This makes bond markets in effect quasi-nationalised, with present valuations only reasonable to pay for investment if negative interest rates are expected to be implemented more widely. We maintain our exposure primarily in sterling denominated short-dated corporate bonds, which offer reduced duration and credit risk, and an above inflation yield. In the event of bond yields rising as the pandemic comes to an end, these will also outperform long-dated bonds.

Management of the Clarion Funds: Prudence, Navigator, Meridian and Explorer 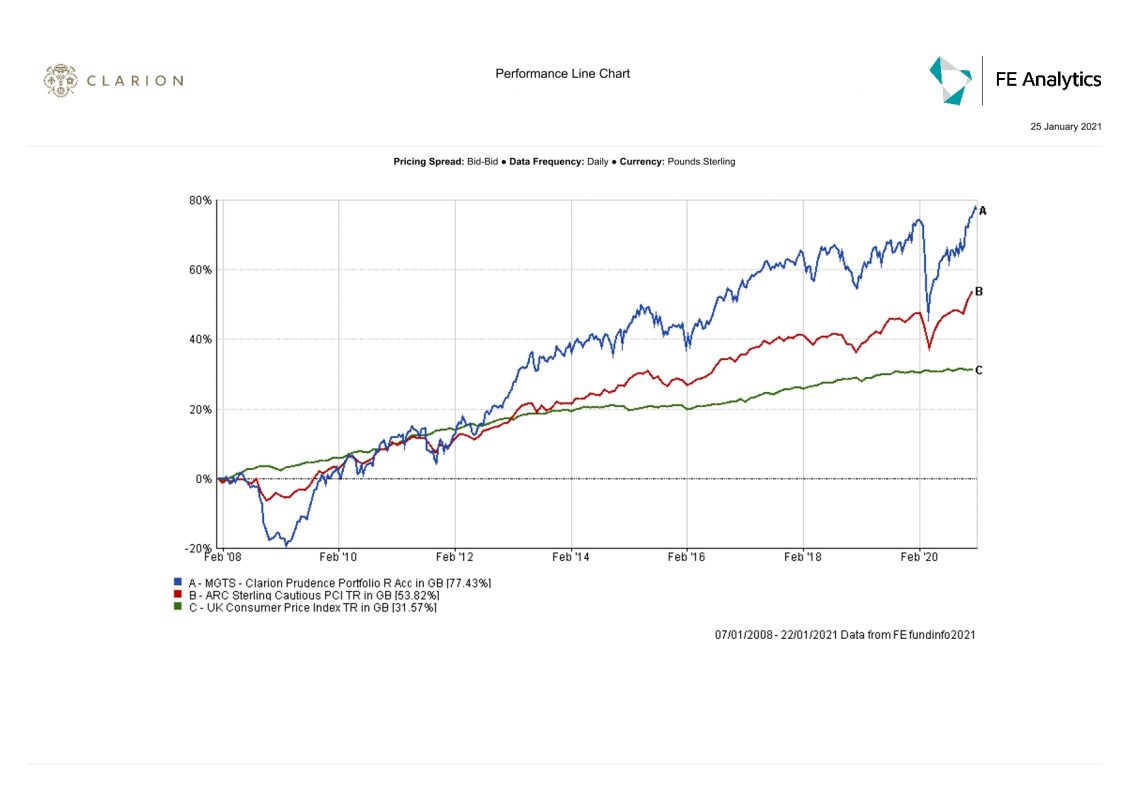 Due to the fact that the Navigator Fund has only been operating for a short period of time, we are unable to provide a useful performance graph of the fund versus its relevant benchmark

The committee believe that now is the right time to remove this fund from the portfolio and agreed that ‘Baillie Gifford Japan’ is the most appropriate replacement for a straight swap. 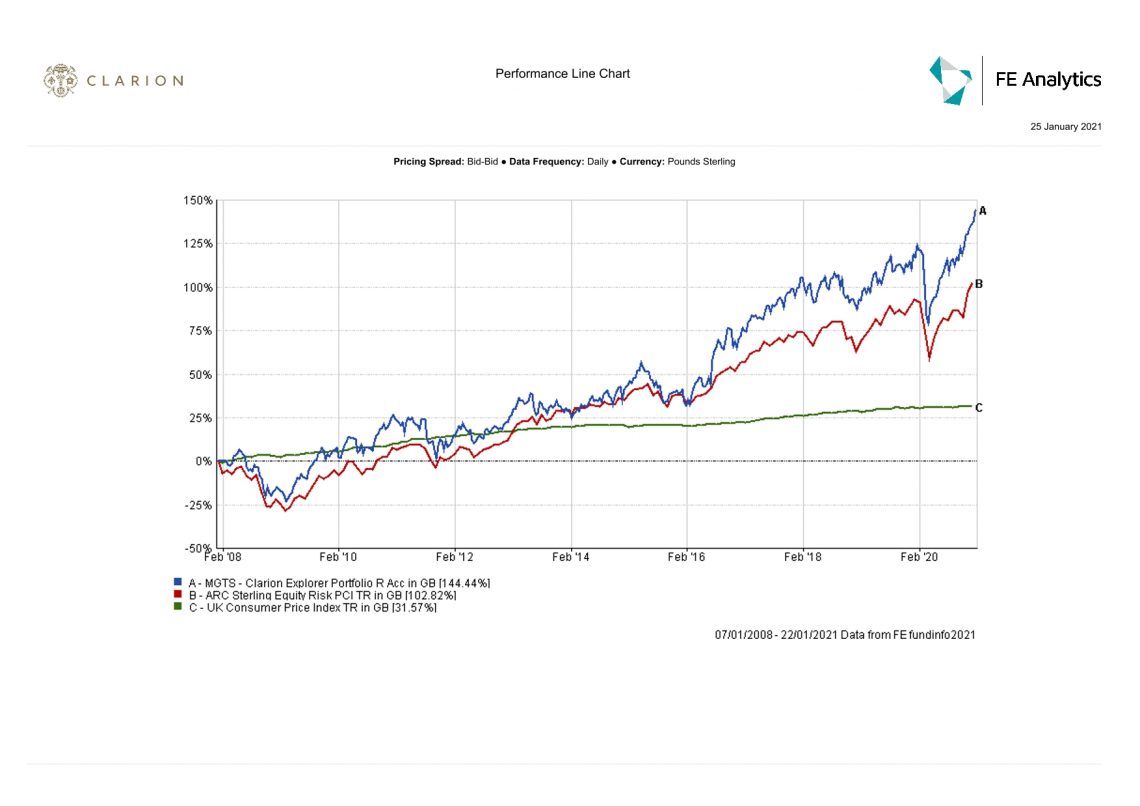 Next Investment Committee Meeting is on 11th February 2020 although in the interim period the Committee intend to conduct slightly shorter conference calls as considered appropriate.