Peter Hargreaves and Stephen Yiu set up the investment business Blue Whale Capital in 2017 and the Blue Whale Global Fund was established shortly afterwards with Hargreaves seeding the fund with £25million of his own money. The main aims of the fund are:

Although some 70 per cent of the fund is invested in companies listed in the US, Yiu is keen to point out that these companies earn their revenues globally. They also generate their profits across a broader range of business sectors than their stock market categorisation would imply. So, while 54 per cent of the fund’s portfolio is classified as ‘technology’, only a fifth of the holdings’ revenues are generated from technology business.

How did you manage the Covid-19 sell-off last year?

No part of the market was spared during the sell-off sparked by the outbreak of Covid-19, but high-quality businesses rebounded quicker than others and have continued to do so, according to Stephen.

Before the coronavirus crisis struck in mid-February 2020, Yiu’s Global Fund had 11 per cent in cash. However, the manager was buying throughout the sell-off and by the end of March, the quality-growth fund’s cash level had fallen to three per cent. With the cash level that the fund had built up, the manager seized the opportunity to reinvest the cash into exciting new companies and existing holdings at attractive valuations. For most investors, it is probably quite frightening when you see stocks that are down 10-15 per cent intraday. Some investors panic, need to sell and raise cash. However, the Blue Whale team follow their companies very closely and exercised confidence to invest, taking a medium-term view.

One of the companies they added significantly to was Microsoft, which is now one of the biggest holdings in the fund. Stephen comments that while the world collapsing, you have this company that can actually grow earnings per share by 15 per cent. Not many companies have been able to do that. Everyone is using Teams, is signed up to Office 365 licenses, and the demand for the cloud, Microsoft Azure, is ever increasing. If you look at the share price, over the year to date, Microsoft has significantly outperformed the S&P 500.

Another name the fund deployed a lot of cash into was Amazon. Amazon was actually a net beneficiary on both fronts, on the commerce front and Amazon Web Services (AWS). A lot of people who hadn’t shopped online before were suddenly Amazon customers and if they were already an existing customer, were shopping more frequently. The other part of the business, which Blue Whale views as more exciting, is Amazon Web Services, which powers Netflix and Ocado, as well as other applications. Much like Azure in Microsoft, they are expecting an exponential increase in demand for AWS and for the cloud.

Since its launch in September 2017, LF Blue Whale Growth has made a 124.8 per cent total return – which ranks it in the top quartile of funds in the IA Global sector. The fund has an ongoing charges figure (OCF) of 0.87 per cent. 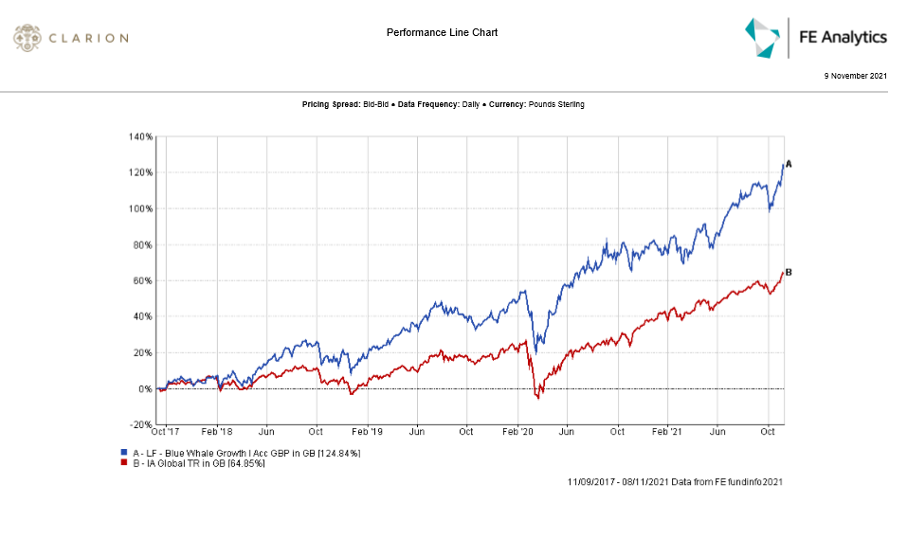