Minutes from the previous meeting held on 16th October 2019 were agreed by the Committee as a true and accurate record.

In recent months there has been a rotation between growth stocks and value stocks. This has impacted on some of the underlying holdings in the Clarion Portfolio Funds and Model Portfolios. Please click here to read our latest Stock Market and Investment Commentary which covers this swing to value stocks in greater detail. The Commentary also briefly examines our strategy on managing the current political risks and ongoing uncertainty surrounding the Election and Brexit.

Other points discussed by the Investment Committee were:

Prudence was c. 1.2 percentage points ahead of the IA Mixed Investment 20-60% Shares sector over 12 weeks. The fund’s performance also remained strong over shorter-term time periods. A positive asset allocation effect was the primary driver of positive relative returns, as underlying UK equity funds outperformed overseas equity strategies over the period. The active allocation to short-dated bonds had a mixed result as over 1, 2 and 12 weeks most short-dated funds performed in line with their respective sectors but lagged over 4 weeks.

There was a rotation in the relative performance of the two underlying Global equity funds. The Fundsmith Equity strategy has lagged the sector by c.6 percentage points over 12 weeks, following an underperformance of growth stocks. At the same time, the more value-oriented M&G Global Dividend strategy outperformed.

The Man GLG UK Equity Income strategy was the strongest performer in the entire portfolio over 12 weeks, delivering a c.7.2% return in absolute terms. The Man GLG strategy has a bias to mid-cap stocks and benefited from the recent appreciation in Sterling.

Meridian has outperformed the IA Mixed Investment 40-85% Shares sector by c.1.2 percentage points over 12 weeks. Similar to the Prudence portfolio, the fund has benefited from stronger Sterling and increasing relative valuations of underlying UK equity funds.

The UK was the best performing equity market over 12 weeks, with underlying UK funds returning c.4% over the period. The Vanguard FTSE UK Equity Income fund was the best performing holding over 12 weeks, followed closely by the Castlefield UK Buffettology strategy. The performance of the Rathbone Income strategy was disappointing as the fund fell c.4.6 percentage points behind the IA UK Equity Income sector over 12 weeks. The Committee will request a commentary from Rathbone regarding the recent drop in the fund’s performance.

The two global strategies were the weakest performers in the portfolio. The Fundsmith Equity fund was the worst performer due to a significant rotation away from growth stocks to value stocks. The Artemis strategy has a more widely spread portfolio and performed slightly better over 12 weeks.

Overall the Committee are happy with the performance of the Clarion Meridian fund and no changes have been proposed. 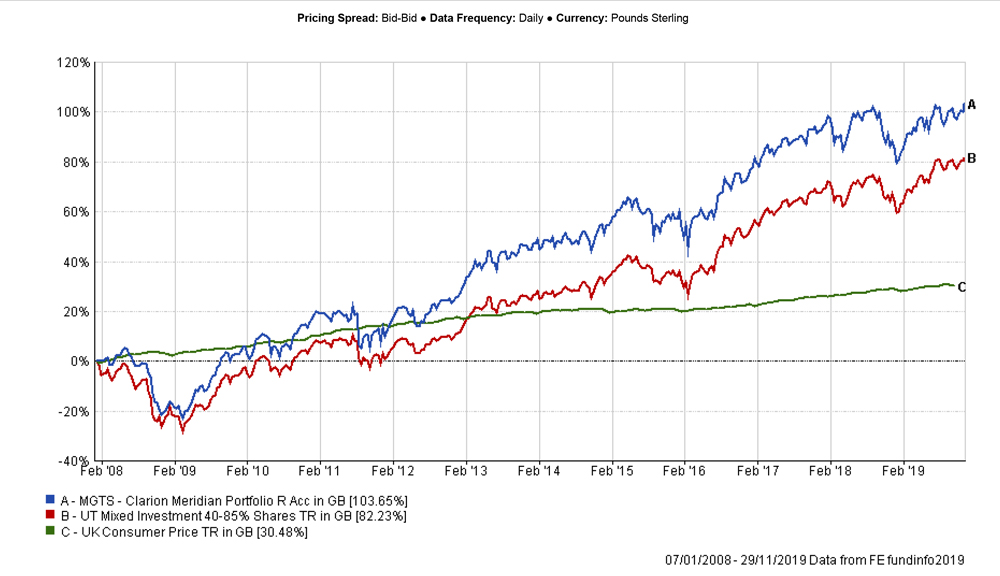 The Explorer fund allocates c.86% to non-UK denominated assets, which have underperformed as the relative value of Sterling increased against most overseas currencies. Despite this, Explorer was only slightly behind the IA Flexible Investment sector over 12 weeks.

The active allocation to the UK had a positive effect on the portfolio’s performance. The L&G Mid Cap Index strategy was the best performing underlying UK holding over 12 weeks.

The Committee were pleased with the c.10.6% return generated by the Lindsell Train Japanese hedged strategy. The fund has benefited from the recent appreciation of Sterling and was the best performing holding over 12 weeks. The Committee voiced some concerns about the recent underperformance of the Baillie Gifford Japanese fund and will request a commentary prior to the next IC meeting.

The Committee members have noted underperformance of most underlying Asian funds, but raised no concerns at this stage, given that it was only marginal. At the same time, most underlying Emerging Markets strategies and both European funds have outperformed their respective sectors.

The Committee are pleased with the overall performance of this strategy and no changes have been proposed.

The Committee agreed new strategic asset allocations for the Clarion models. DK will work with AW on the tactical asset allocations and new fund selection. This work will be concluded prior to the next IC meeting and all the changes will be implemented shortly after.

The Committee agreed not to overdiversify models and will choose the shortlist of best available funds, which will then be implemented in portfolio construction.

The application for the new fund has not yet been submitted to FCA. Some members of the Margetts Risk Committee feel that changes to the Clarion Explorer strategy are likely to be more structural than initially anticipated. TR feels that there is no need to treat it as a significant factor given that objectives in the prospectus are relatively wide and do not underline any specific risk/return parameters.